Get to know FAF, our Brazilian Coffee Partner

We chat with Felipe Croce from FAF Coffee about hosting the Mecca team back in 2008, and how 14 years later the relationship has allowed us to bring some remarkable Brazilian coffees to Australian shores. In a country dominated by mass-scale farming practices, Felipe’s ongoing commitment to quality, regenerative, environmentally friendly coffee production is nothing short of inspirational. 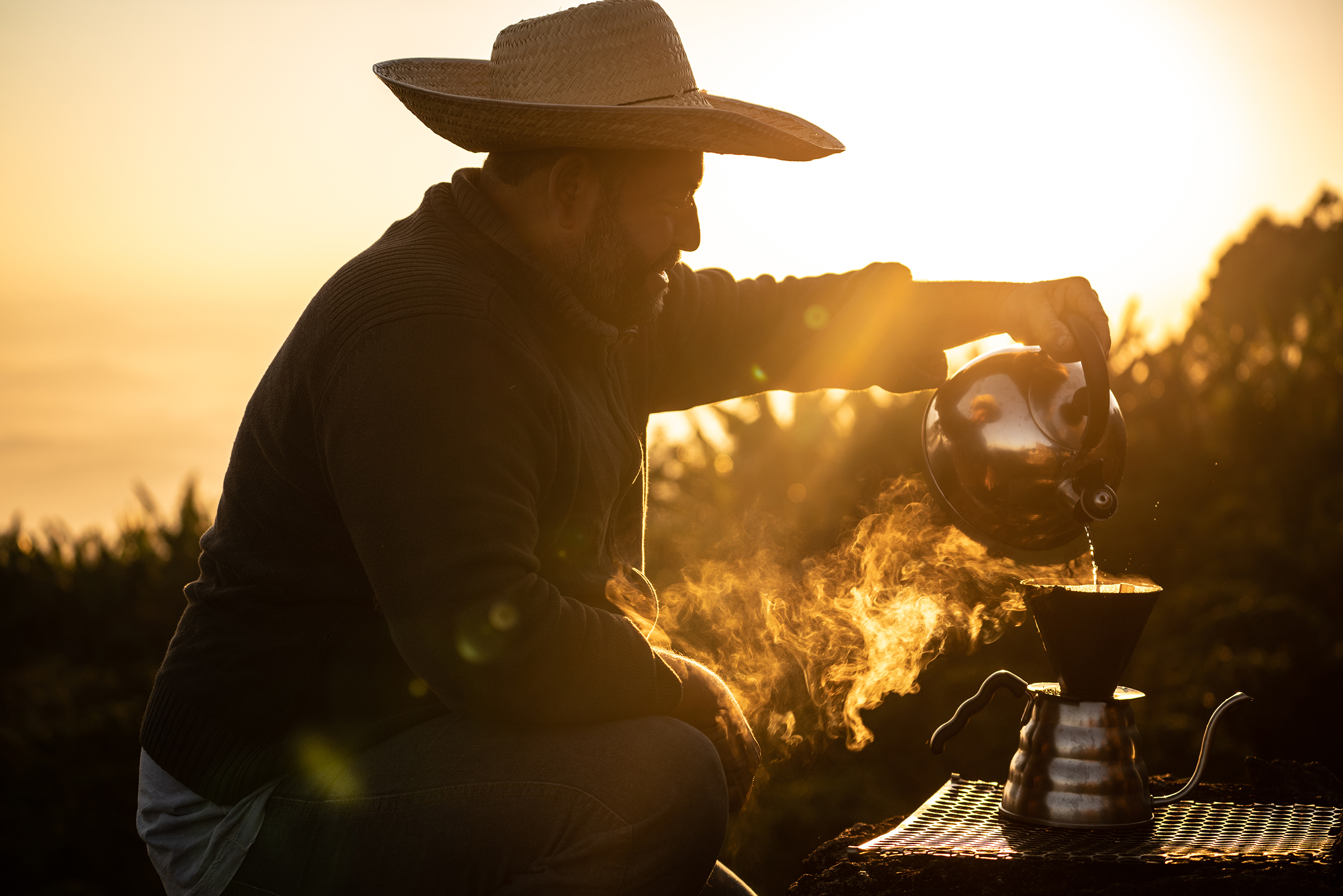 It was way back in 1946 when Frank Sinatra sang, “They’ve got an awful lot of coffee in Brazil”, a tune that perfectly sums up Brazil’s seemingly infinite production of the crop. At that time, Brazil was providing a staggering 80% of the world’s coffee, and coffee exports made up 63% of the country’s total export revenue in 1950. That’s a lot of money hinging on a single crop!

Not long after Sinatra’s tune, the industry began to face some tough realities. Maintaining the workforce required to produce such high levels of coffee was one challenge; the industry had relied heavily on slave labour (which was abolished in the 1880’s but continued in practice into the early 20th century), as wealthy land owners enforced harsh labour conditions on immigrant workers. Environmental impacts were also becoming too big to ignore. Shifting cultivation led to widespread deforestation, and the standard intensive farming methods depleted soil after a decade or two, pushing farms outwards to new lands to keep up with demand.

By the 1990’s, the global coffee industry had matured to expect quality with their quantity, and coffee was no longer a one-dimensional commodity. Other producing countries around the world had gradually increased their market share of exports too, challenging Brazil’s wealthy plantation owners and Government bodies to adapt their long-established practices to keep up. The invention of mechanical harvesters allowed large farms to greatly reduce labour costs, and the Government’s deregulation of the industry incentivised many producers to focus on improving their coffee’s quality to fetch higher prices.

Our Introduction to Brazil

By the time we were roasting our own coffee at Mecca in 2005, Brazilian lots were generally considered a functional but somewhat unglamourous addition to a coffee roasters menu. Lots were widely available, relatively cheap and predictable in flavour, with the stereotypical ‘Brazil’ flavour profile being nutty, smooth, inoffensive and sweet. But, stereotypical is the key word here!

Mecca was established as a roastery that sourced stand-out quality coffees, even if it meant engaging in a bit of detective work. Our approach was to seek out smaller-scale microlots, which sometimes required conversing with importers and other small roasters, working out the logistical challenges of buying smaller amounts of niche coffee within a system that dealt in bulk container loads. Transparent, direct sourcing was more of a rarity back then.

By 2007, we had been connected with Felipe Croce from FAF Coffee. FAF stands for Fazenda Ambiental Fortaleza, a model farm near the border of Sao Paolo and Minas Gerais that had recently been established as a fully-fledged facility that explored innovation in agronomy and farm management for better environmental sustainability. We had only a limited understanding of coffee agronomy and farm-level operations, but we certainly knew that we were excited by the coffees we’d tasted. So when Felipe and his team invited us to fly to Brazil in 2008 to see the facility and the region, we jumped on the opportunity without a second thought!

Mecca founder Paul Geshos tells the story of his arrival at origin in 2008, being picked up from the airport by representatives from the coffee production team and driven out toward the FAF Coffee facility - their first international ‘coffee’ visitor.

Paul figured that he’d see picturesque fields of coffee trees along the drive but instead recounts seeing nothing but stretches of barren land, devoid of any plant or animal life, the soil dried and untenable, like a desert. “Coffee used to grow here, but the farming has ruined the land and they’ve moved on. It will take many more years before anything can grow here again”, he was told.

These had been massive farms with big quotas to fill, doing so through mass-scale monocropping, use of intensive chemical sprays, fertilisers and machine harvesting to achieve the highest possible yields, fast. From a business and historical perspective, it was understandable. Brazil had always been the biggest supplier, these methods were just the most efficient ways of keeping up with global demand. However there was clearly an ongoing environmental cost that wasn’t being fully acknowledged by the rest of the world.

Further up the mountain, just 15 minutes later, the team arrived at the FAF coffee farm and Paul was greeted with a completely different sight. Suddenly they were surrounded by healthy green vegetation, coffee trees thriving amongst a diverse variety of shade plants and tall trees. It was like stumbling across an oasis in the desert.

Felipe and his team were hard at work proving to others in the region that adopting eco-friendly and regenerative methods of coffee growing was not only achievable and sustainable, but could actually help to reduce their farm costs and boost their coffee’s quality at the same time. What a Win-Win!

Paul describes this as a ‘penny-drop’ moment, witnessing the stark contrast between two sides of the coffee industry that most people in consuming countries remained unaware of. Mecca now had a responsibility to support those driving positive change in coffee’s farm-level, agricultural industry through careful sourcing and partnerships. Supporting people like Felipe who were at the forefront of new research and methods, and sharing their stories with coffee drinkers back home, was now part of Mecca’s mission.

Which brings us to today…

They’ve still got a sh*t tonne of coffee, but Brazil’s reputation as an exciting and progressive country for specialty coffee has never been better. We’ve stayed in close contact with Felipe and FAF over the years, and since then the organisation has grown to support a wider network of small family-owned farms around the region.

This year, we’re featuring a very special coffee from João Hamilton, who happens to be one of the first-ever producers we purchased from through FAF. João’s farm has 100-year-old coffee trees, and this particular lot is Sumatra (Typica) coffee, a once-common variety that was mostly eradicated by farmers seeking to grow more productive trees. It was discovered to be sneakily growing on the farm amongst the other trees.

João’s meticulous care for his farm is noteworthy; he employs a closed-loop method of farming, taking on great sustainable techniques such as composting coffee husks back into the soil and planting cover crops to improve it’s health, resulting in a minimal need to use fertiliser and foliar sprays. Through these two techniques he has been able to build and maintain a very fertile soil and be less dependent on external inputs. He also chooses to process his coffees using a natural, ‘dry’ processing method, but does so with a huge level of care to ensure no ‘off’ flavours are generated and the resulting cup profile remains clean and balanced.

We’re thankful for the ongoing contribution that Felipe and the FAF team have made to improving coffee quality and sustainability in their region, and are proud as punch to work with them as our exporting partner in Brazil. 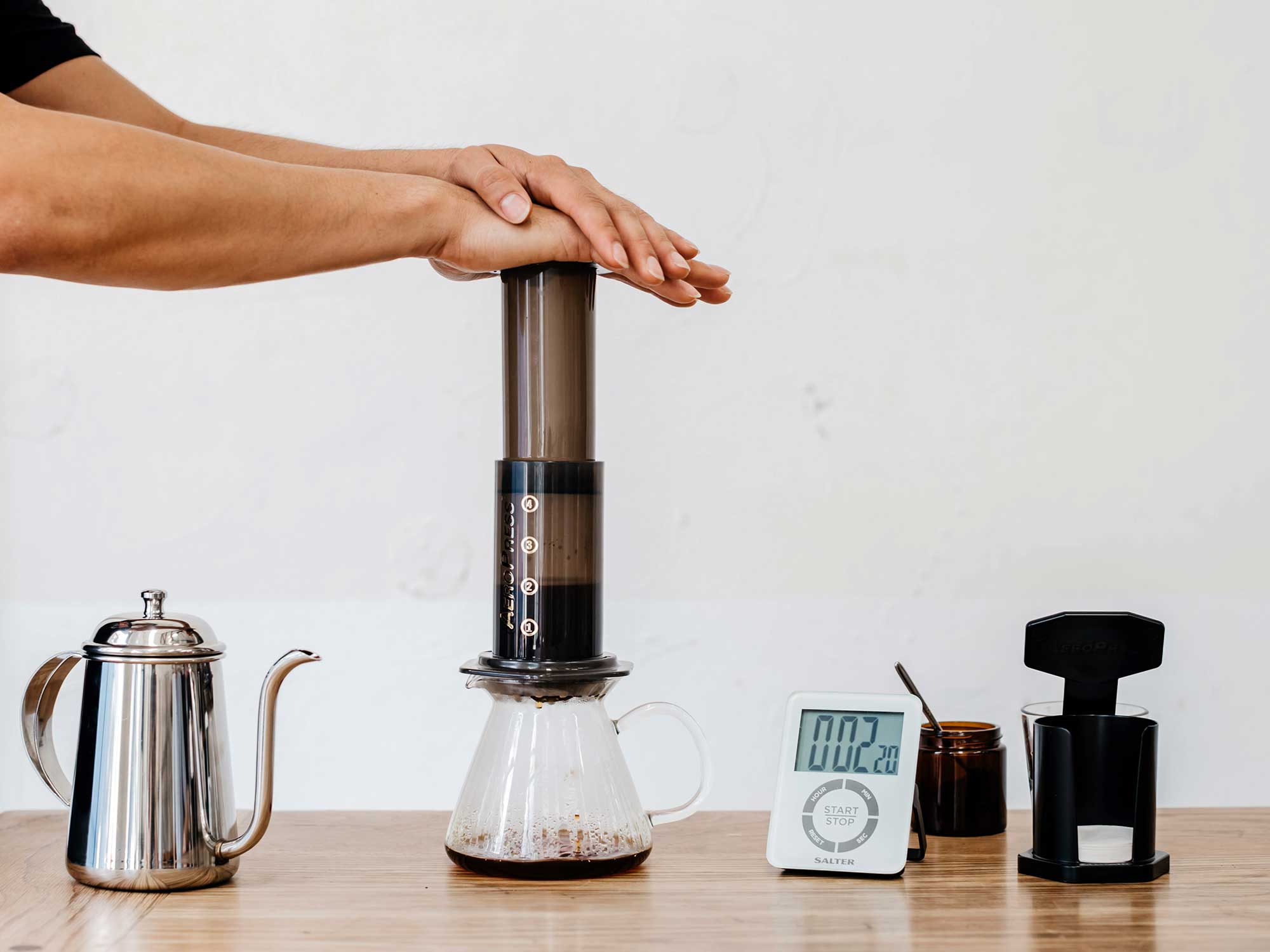 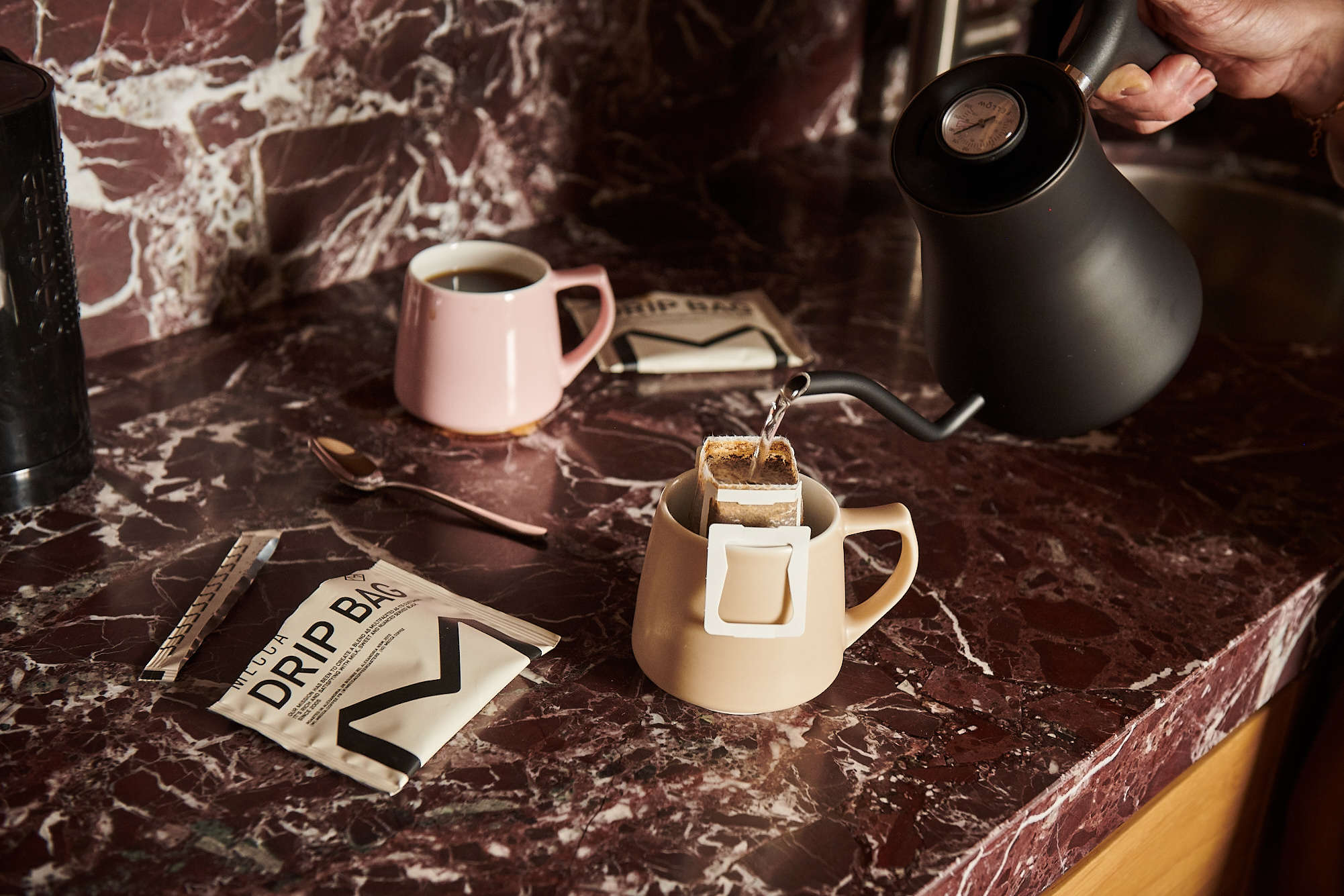 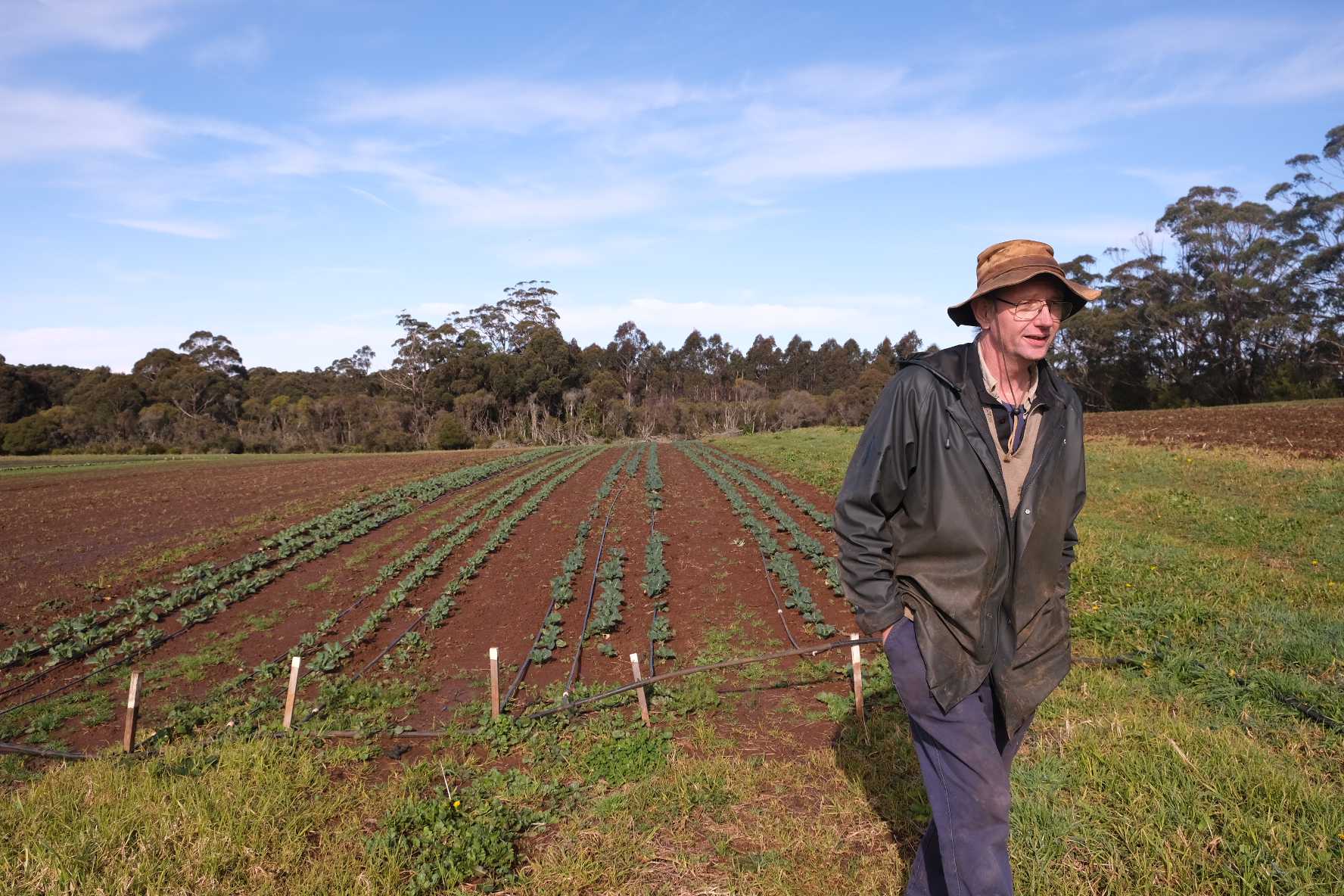